This article is a stub. You can help Tomo-chan wa Onnanoko Wikia by expanding it.

Kousuke Misaki (御崎 光助, Misaki Kōsuke?) is an upperclassman of Tomo's school. She and everyone else in her grade and presumably below call him "Misaki-senpai".

Misaki has a girly face, so much that when Jun saw a picture of him he thought he was a girl until he met him. He has blond hair and blue eyes.

Misaki is a very timid but strong willed guy. He also got embarrassed when he accidentally saw Tomo's cleavage proving that he thinks of her as girl and also that he is respectful of that fact.

During his youth he was described as a gloomy child.

During Kousuke's third grade he was a gloomy child as a result of constant bullying about his foreign-looking appearance (blond hair and blue eyes). He was found by Carol, his distant relative, and unnaturally cheerful girl. She had also been bullied for the same reasons but seems completely unaffected by it. Before Kousuke could get away Kuniki, his classmate and bully, approached him with her two lackeys. After insulting Kousuke, Carol smacked her in the face (clearly not thinking of the repercussions). When Kuniki targeted Carol, Kousuke stepped in front of her to protect her. When Carol encouraged him to fight them the bullies beat him up. After they had walked away Carol went to Kousuke's side to tend to him. Having not been in fight before Kousuke was injured, Carol explained that she always got into fights but always lost. Later at a road crossing, Carol got distracted by a butterfly and almost went onto the road before being saved by Kousuke. Carol's aloofness about almost dying instilled in Kousuke his desire to protect her.[1]

Kousuke treats her like a beloved younger sister, something that irked Carol. Carol still has feeling for him from when they were kids. Kousuke comes to Carol's rescue when he thinks she's in trouble. When Kousuke fails to notice Carol's feelings she gets upset, Kousuke went to her house to see if she was alright. They then kiss and later start going out.

Kousuke greatly admires his kouhai Tomo and wishes to be as strong as she is one day. They are both good friends and are in the karate club together, and Tomo is also in the boy's karate club due to the fact that none of the girls want to train with her.

Kousuke is extremely intimidated by Jun as the first thing he did when meeting Kousuke was to hit him. Kousuke admires Jun's strength though and his will to protect Tomo. 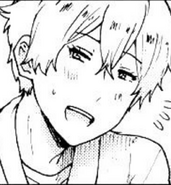 Kousuke close-up
Add a photo to this gallery

Retrieved from "https://tomochan-wa-onnanoko.fandom.com/wiki/Kousuke_Misaki?oldid=1030"
Community content is available under CC-BY-SA unless otherwise noted.